This one came to me after the customer became frustrated with the shop that sold her a fuel pump. She had been back to the shop 3 times with fuel gauge problems after they installed the fuel pump. She told them the gauge was inaccurate and wouldn’t read full when it was filled at the gas station. They were insistent the fault was with the gauge on the dash and wanted to sell her a cluster to correct the problem. This one wasn’t cheap. 700 bucks total was the replacement bill. She decided not to have them do the work because she didn’t have any problems before they replaced her fuel pump.

After some preliminary inspection it was necessary to remove the fuel pump to inspect the installation work. WOW!  What a great job. They knocked the fuel level float assemble off of the fuel pump housing. The float was just lying inside the tank moving around at random. It’s not a wonder she had a problem, but 700 bucks would not have corrected this one. Sloppy workmanship was the problem and the shop wasn’t even willing to double check the work they did before condemning the dash cluster.

What a wonderful job they did. Can you afford to waste 700 dollars that won’t fix your car ? This is the result of unskilled labor and sloppy workmanship….

Guess who has to pay to have this problem corrected. Don’t let this happen to your car. Find a qualified technician to work on your car or it could cost you a lot more than you ever expected. Don’t let unskilled labor cost you unnecessarily. 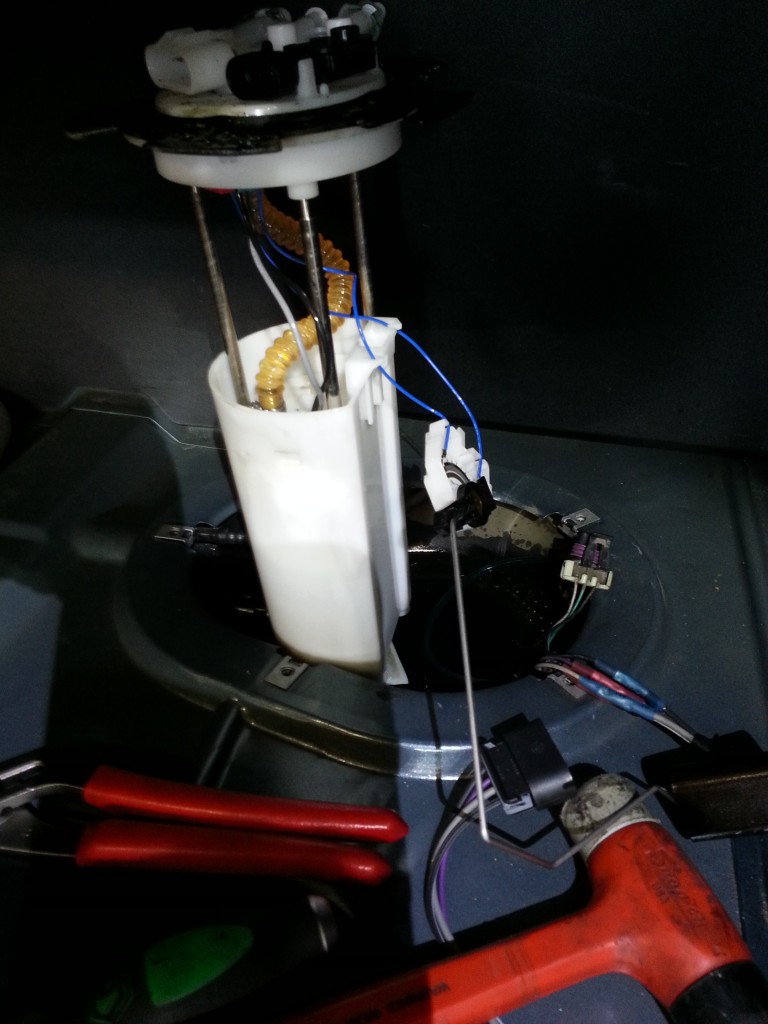 As you can see in the picture this was caused by someone in a hurry. They didn’t even take the time to check their work and didn’t care about the job they did. The fuel level float was completely knocked off the fuel pump housing. This is not the type of work you want to pay good money for. Then be charged another 700 dollars to try and fix something they caused because it’s easier to throw parts at it than it is to diagnose it. Anyone can hack and butcher a car. Don’t get ripped off by unskilled labor.

My 2003 Lincoln Town Car started running rough and tripped the service engine light. I called Auto 1 Diagnostic and he came over the next day. He not only checked the code, but did a compete diagnostic check on the compression, fuel system, just about everything. He determined that the problem was a misfire on cylinder 5 and that the coil was bad. Upon further inspection he could see that the spark pugs were old and shot as well.

So, he replaced the plugs, and the coil, and did a service which cleaned out the throttle body and intake from all carbon deposits.Then, he actually road tested the car to make sure everything was good. It now runs better that it has in a long time.

It’s great to do business with someone who actually knows what he is doing, who uses the proper equipment to determine exactly what the problem is, and then shows such great attention to detail to make sure everything is done correctly.

This one came to me after another shop worked on it for heater blower motor problems. The owner says a shop had installed 3 new blower motors over the last 4 months and was unable to figure out why this continues to be a problem. The first two were from the auto parts store and the last one was an OEM unit from the dealer.  The vehicle is a 2003 Ford E-150 Van with a 5.4L engine. The truck has AC and everything else works normal. After doing a little electrical diagnosis, I found the blower motor has a very low voltage supply on all fan speed settings. The voltage drop measures over 7 volts at the motor plug.

Time to perform some further diagnostic work to trace down the cause of the voltage drop. This lead me to the blower motors relay/control module mounted under the hood.
It’s located in the HVAC case near the blower motor fan to keep it cool when in use. The voltage drop isn’t present on the power feed input circuit, but it shows up on the modules output control circuit. After narrowing it down to the control module and unplugging the unit, you can see why the motor didn’t work so well. The original motor had a high amperage draw and caused the power output wire to melt at the terminals. The shop had it halfway fixed, but fell short and wasted the customers time and labor time to replace good parts 3 times. It’s a parts throwing palooza and nobody is having any fun. Especially the owner. 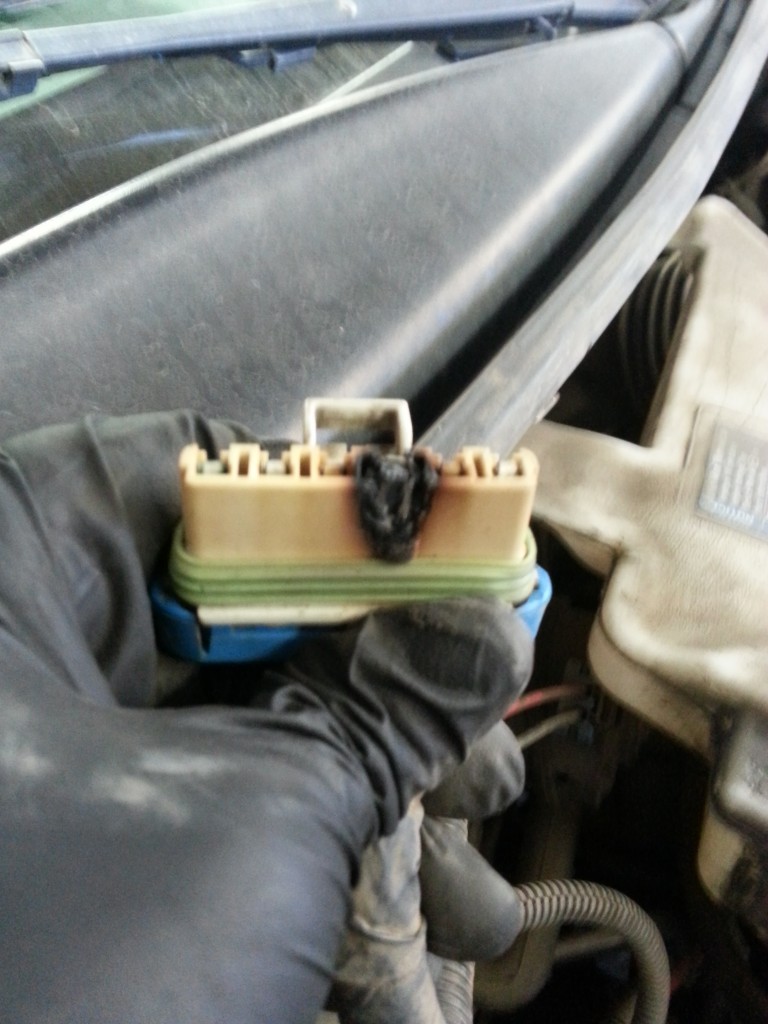 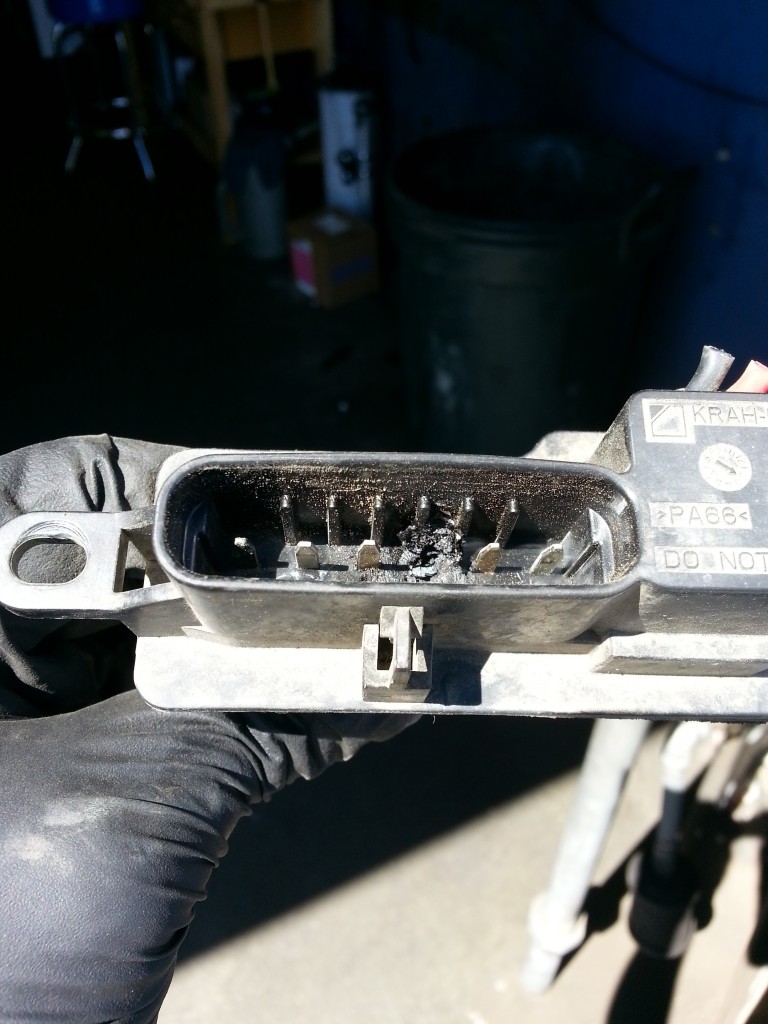 As you can see by the pictures above, the control module and the wire harness connector are both melted from the heat caused by the original blower motor failure. It was necessary to splice a new connector onto the harness and replace the heater blower motor control module. The 3rd blower motor was not damaged. It wasn’t necessary to replace it for a 4th time. It’s simple electrical problems that can turn into nightmares from unskilled labor. Customers are paying good money for bad repairs, even if they think they’re saving a few bucks. Don’t waste time and money by using the cheapest repairs you can find. The old saying still holds true to this day……You get what you pay for. Save time and money by fixing it right the first time. Know who’s working on your vehicle and if they are worth the money you’re paying…..

Today’s call wasn’t that unusual in the fact that the car had been to a local dealer for a check engine light. The dealer found a DTC P0340 that pertains to the camshaft position sensor. The customer also had a vehicle inspection done. They charged him $139.00 for the diagnostics The dealer told him the camshaft position sensor was bad and needed to be replaced. They also told the customer they were not sure if that was the only problem or not. They said it could be a PCM and that they would need to first replace the camshaft position sensor to know if the PCM would also need replacement. This was at a Ford dealer in Salinas. This is a common dealer practice to avoid proper diagnostics and throw parts at the car without being held accountable for their lack of diagnostic work.

The customer was given a preliminary estimate to replace the camshaft sensor for $680.00 and they would let him know if the PCM was okay after they did the work. This customer had me work on another of his vehicles and had called me for an estimate to do the cam sensor replacement work on this one. I gave him a quote and explained that there is no guarantee it will fix the problem because I didn’t diagnose the check engine light fault. He agreed and just wanted me to do the work as soon as possible.

I set it up for Friday the 13th in the morning and started to take the car apart to gain access to the cam sensor. This is a 2002 Ford Thunderbird with a 3.9L V-8 and the sensor is buried under the cowl and front strut support bar. After removing the necessary hardware to gain access to the sensor and connector, I spotted that the sensor’s plug assurance tab was not closed and the connector was not plugged in properly. I pulled on the connector and it fell out of the other side. I also noticed 2 broken bolts on the valve covers at the rear corners.

That’s when the customer told me that he’d had a Craig’s List mechanic replace the spark plugs and valve cover gaskets a while back and the person damaged and broke the bolts for the coil covers that bolt to the valve covers. The customer said that the check engine light came on after the work was done. He also said he had contacted this mechanic and was going to meet him at his next job to have him recheck the car, but the guy never showed up and won’t answer his phone anymore. He told me this guy’s name is Luke and he’s the 40 dollar guy on Craig’s List. I’ve had the pleasure of repairing other customer’s cars after this guy has caused damage and performed bad repairs on other vehicles.  He’s not a good mechanic by any stretch of the imagination and will stop taking calls when things go bad. Don’t be taken advantage of by this type of underhanded repair scam.

Anyway, I found the problem and it wasn’t a bad cam sensor as the dealer stated. It’s obvious they never did more than pull codes and condemn the sensor without doing any diagnostics. They charged the owner $139.00 to diagnose it and never spent any more time than to read codes. This is why dealers have a bad reputation. On top of that, they did the inspection and told the customer his brakes were good. After I corrected the camshaft sensor issue, the owner asked me if I knew of any way to remove a rock from his brake pads. I told him that I’ve never heard of this problem.

I looked at the left front rotor and could see where it was starting to scrape on something and explained that I would need to do a brake inspection. He said the dealer told him that his brakes were fine. I took the brakes apart and found that the pad had no brake material left and I would need to do a front brake job as well. I finished the car and gave it a good road test. The customer was very happy that I was able to fix his car for much less than the dealer and do the job properly. Don’t let unscrupulous dealers and Craig’s List wannabe mechanics take advantage of you and your car. Find someone you can trust and keep them as your mechanic.  I’m glad that this customer didn’t fall victim to the dealer’s scam and only had to pay a fraction of the repair costs that the Craig’s List scammer caused.