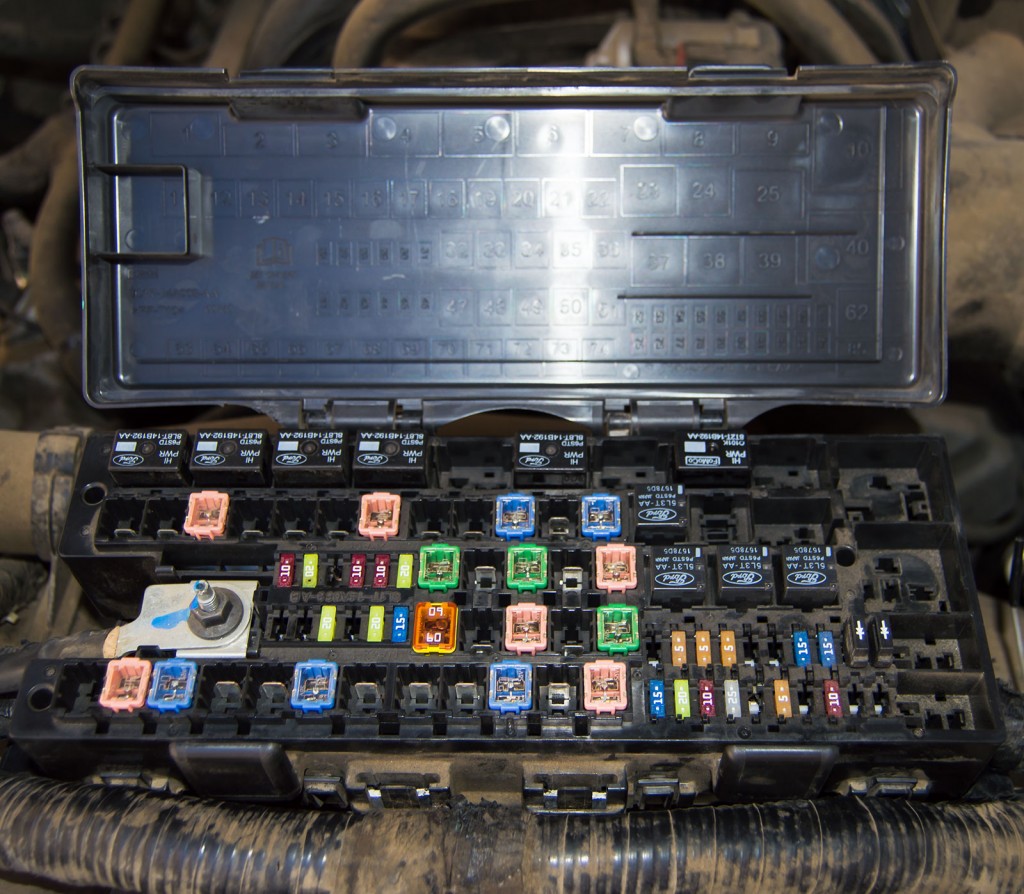 The Battery Junction Box – They managed to break every mounting post to get the box opened.

This one came to me through another shop. The customer is a regular patron of the referral shop, but they didn’t wanna tackle it. They are not equipped for this type of work and know better than to take on something like this.  The customer had it into a shop elsewhere out of town and they sold him a $1000.00 PCM to try and fix a random no start.

It was referred to me and I found a lot of damaged wires, broken BJB mounts, pinched wires and general poor workmanship all over this one. They replaced a relay, the PCM and hacked the wire harness trying to resolve this problem. They never managed to find it and after spending $1500.00 plus, the customer was not sure it could ever be found. 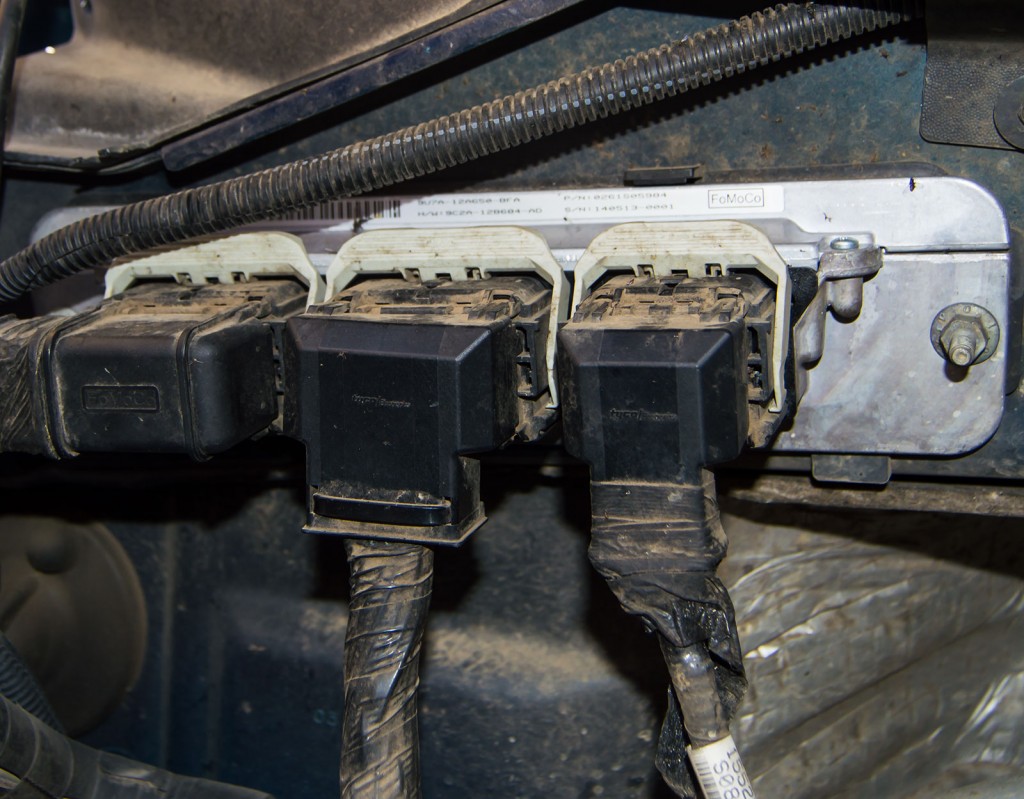 I came to the customer’s residence and set up my diagnostic systems and started by looking at the factory wiring diagrams. The fault was traced to the load side of the relay they replaced. Without testing the control and source side of the circuit they decided to throw the best guess and most expensive part at the problem. They guessed it was the PCM that was causing the problem and never tested it’s ability to control the relay before spending $1000 of the customers money on it. They guessed WRONG!

I wish I could afford to spend money like that…. Can you afford to ? 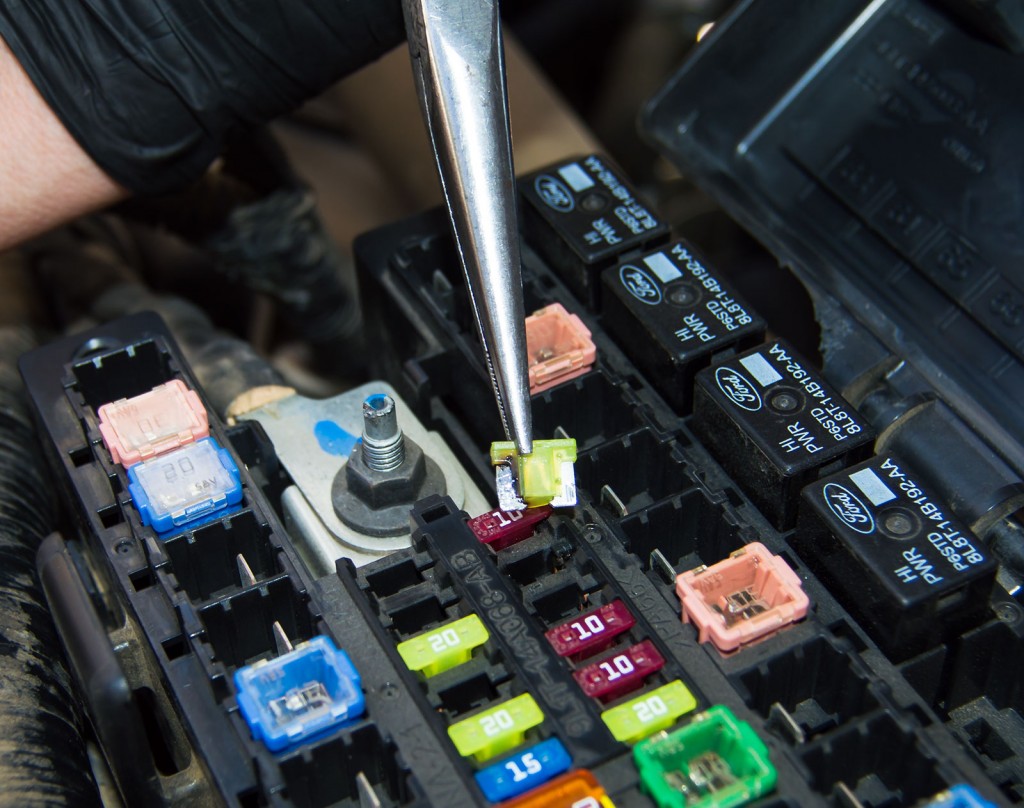 The COF  This simple fuse problem was overlooked. The fuse was overheated from high resistance in the BJB. The simple 12-volt basics were overlooked and guesswork won out.

After looking at the wiring diagram, I quickly found the source of the intermittent no start problem. The fuse was getting hot and the contacts were burnt. The contacts had reduced contact tension which caused a loss of power after the vehicle was driven and allowed to get up to operating temperature. The BJB is in the engine compartment and above the radiator. This would cause expansion and contraction from the temperature changes. These changes would cause the fuse to drop voltage across the terminals and result in a no start condition. After sitting for a few hours it would restart because the contacts were able to carry the voltage and amperage when the BJB would contract after cooling off. It would complete the circuit and the truck would start again.

The BJB is part of the wire harness and it carries a price tag of $1100.00 with a 3 to 4 hour replacement time. It’s a lot of work and an expensive repair for such a minor issue. Imagine the shock from being told this after you wasted $1500.00 on guesswork repairs that didn’t fix anything. Now you need to spend another $1500.00 for the correct fix. That’s double the cost due to unskilled guesswork by uneducated non-professionals.

In reality, this was done by a so-called Dealer Technician. This doesn’t really surprise me as I see this type of work way too often. It’s a recurring pattern in my field.

I was able to correct this problem without the need to spend that $1500.00 on the replacement BJB by moving the circuit to another fuse port in the BJB.  Needless to say the customer was very happy to have it fixed and without spending needlessly. I also did a current ramp test of the circuit to verify it wasn’t an over amperage problem on the load side of the relay. The fuse is on the feed side of the relay and the original fuse never blew. The amperage test  on this 20 amp circuit shows the circuit only pulls 9 amps and is well within the operating threshold specifications.

This Case is closed and with another happy customer.